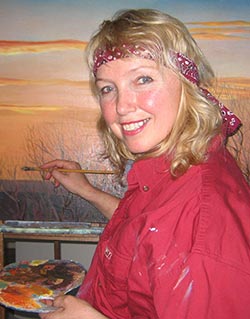 Stephanie arrived in Australia in 1973. She spent her childhood and youth in Slovenia, where she completed a four-year Art College in Ljubljana, the historic capital of Slovenia. There she studied Art History and Visual Art in all different mediums. As part of her study she attended many art galleries and museums in Europe. She later pursued more art education and attained a Diploma in Visual Arts through the Goulburn-Ovens Institute of TAFE.

After arriving in Australia, Stephanie commenced a career as a Commercial Artist. She also painted for recreational purposes. After settling down to a family life in Albury-Wodonga, she continued her career in Graphic Art and later teaching art at a secondary college and TAFE on a part time basis. During that time she became seriously involved in painting and focused on her art from a different perspective, passionately portraying her experiences in her artwork.

Her sense of balance dictates the romantic use of brilliant colours and expressive detail. Stephanie believes it is difficult to paint something one has not experienced. As she observes the wide horizon of this country, the lively colours and vibrant diversity of composition inspire her. She feels the heat of the sun radiating from the earth, melting the oil of eucalyptus trees, scenting the air and filling it with serenity and tranquility. As she walks in the landscape, Stephanie is constantly sketching the minutest details of the landscape and the bush. Frequently her inspiration draws on the fragments of memories. She often travels overseas to her home country and is invited to artist colonies to join groups of artists producing art whilst there which led her to have several international solo and group exhibitions.

Stephanie likes to observe people from a distance, yet takes a closer look at their relationships. Her passion for people inspires her to draw and paint portraits of people from real life. From the early years of her living in Australia, she became involved with people from diverse cultural backgrounds through interpreting and coordinating different projects. Stephanie finds people a great inspiration for many of her artworks.

Stephanie exhibits regularly and has won numerous awards. Her paintings can be seen in many private and public collections in Australia, USA, UK, Germany, Slovenia, Croatia, Italy, Sweden, Greece and Austria. One of her paintings titled Joy of a Nation hangs in the Croatian Embassy in Canberra. Two international galleries in Slovenia and in Italy, each acquired two of her paintings. Stephanie s paintings continue to attract attention and are respected by many discerning art lovers.